Swiss watch manufacturer Frederique Constant and Fullpower Technologies from Silicon Valley are pleased to announce that the first Horological Smartwatches, luxury timepieces with connected functionality, are officially available in stores. The first watches have shipped from the Frederique Constant Manufacture in Plan-les-Ouates, Geneva, to customers in Switzerland and the USA. Shipments worldwide are starting as well.

After three years of research and development, in collaboration with Fullpower Technologies Inc. of Santa Cruz, California, and Manufacture Modules Technologies Sàrl, Frederique Constant was the first Swiss watchmaker to unveil the Horological Smartwatch, powered by MotionX®, last February. The MotionX platform provides the most accurate and advanced data regarding the quantified self, including sleep and activity tracking, all with over two years of battery life. After the enthusiasm generated by the initial launch, Frederique Constant presented four additional models for gentlemen during Baselworld in March.

“These Frederique Constant watches are beautiful, smart and connected with over two years of battery life and the most complete and accurate quantified self implementation,” said Peter Stas, CEO of Frederique Constant. “With their timeless, analogue dial designs, Frederique Constant has created a smartwatch that combines classical design that we love with the technical innovation that we want.”

Frederique Constant is a family owned watch manufacturer based in Plan-les-Ouates, Geneva, Switzerland. The company is involved in all stages of watch production, from initial design, to final assembly and quality control. Frederique Constant develops, manufactures, and assembles in-house calibers, 18 different versions since 2004. Frederique Constant watches are defined by their high quality and differentiation and precision in design and manufacturing. Their perceived value, through quality of design, materials, and manufacture, is a key component of their success. Each watch is assembled by hand, with the latest equipment and extensive controls, to ensure maximum quality and durability. The company embraces innovation to offer creativity and exceptional value. Its 32,000 square foot facility in Geneva is ultra modern and offers the best environment for its passionate watchmakers.

MMT (Manufacture Modules Technologies Sàrl) is a new Swiss joint venture formed by Fullpower Technologies, Inc. of Silicon Valley and the owners of the Frederique Constant Group. Its mission is to bring the MotionX-365® Horological Smartwatch Open Platform to the Swiss watch industry. Fullpower creates and licenses the schematic design, firmware, smartphone applications, and cloud infrastructure to MMT. MMT manages the development and production of Swiss watch movements (also referred to as modules) incorporating Fullpower’s technology, and licenses, and provides support for, the MotionX-365® Horological Smartwatch Platform to the Swiss watch industry. MMT’s headquarters are in Geneva. 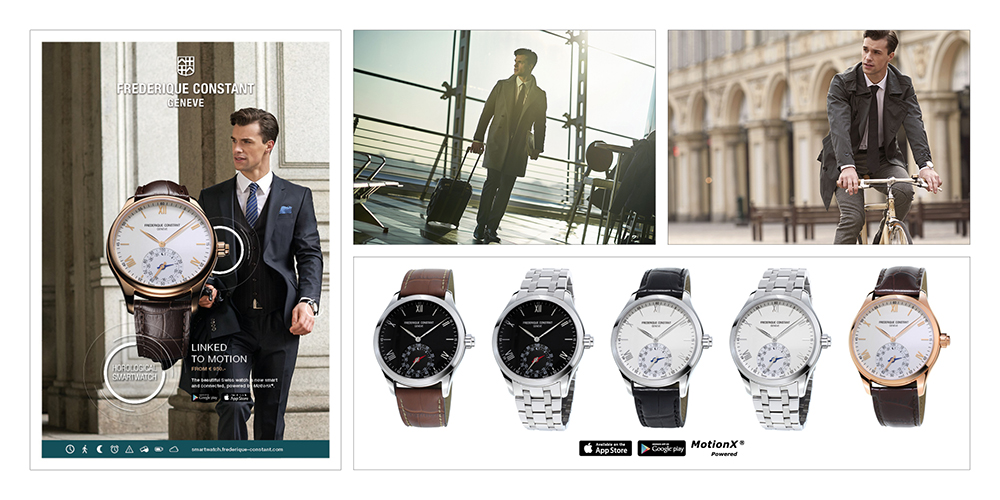 By clicking "Accept All", you agree to the storing of cookies on your device to enhance site navigation, analyze site usage, and assist in our marketing efforts. You may change your settings at any time or accept the default settings. Cookie Policy

On our website, we use services (including from third-party providers) that help us to improve our online presence. The following categories of cookies are used by us and can be managed in the cookie settings. We need your consent before being able to use these services. Alternatively, you may click to refuse to consent, of access more detailed information and change your preferences before consenting. Your preferences will apply to this website only. You can change your preferences at any time by returning to this site or visit our privacy policy.

By authorizing third-party services, you allow the placement and the reading of cookies and the use of tracking technologies required to keep our website reliable and secure.

These cookies are required to run available services and to provide basic shopping functions. These cookies are exempt from consent according to the exceptions provided by the Article 82 of Data Protection Act

These cookies allow us to measure visitors traffic. They also help us understand which products and actions are more popular than others