A BIT ABOUT PEARLS

Pearls have fascinated civilizations for thousands of years. Although it is unknown when pearls were first discovered, civilizations in China, India, and the Middle East are among the first civilizations known to have cherished these rare treasures. Over time, pearls have continued to grow in popularity, and today, they are one of the most popular… 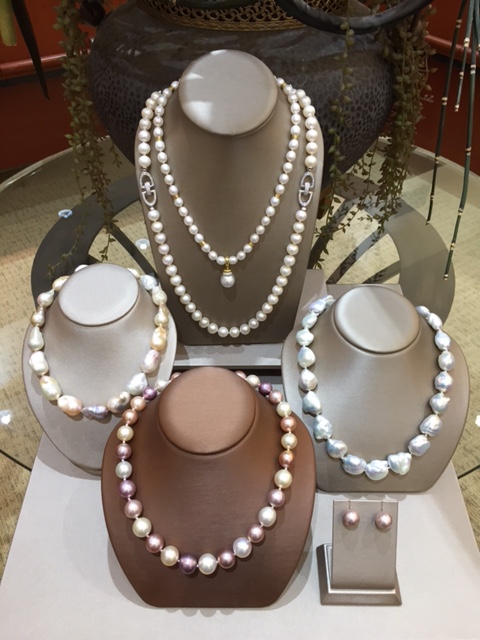 Pearls have fascinated civilizations for thousands of years. Although it is unknown when pearls were first discovered, civilizations in China, India, and the Middle East are among the first civilizations known to have cherished these rare treasures. Over time, pearls have continued to grow in popularity, and today, they are one of the most popular gemstones.

Regardless of whether a pearl is natural or cultured, both types of pearls are formed through a similar process. Pearls are formed inside the shell of certain mollusks as a defense mechanism against a potentially threatening irritant such as a parasite inside its shell, or an attack from outside, injuring the mantle tissue. The mollusk creates a pearl sac to seal off the irritation.

The difference between natural and cultured pearls focuses on whether the pearl was created spontaneously by nature – without human intervention – or with human aid. For thousands of years, natural pearls were the only pearls available to the numerous civilizations that treasured them. Nevertheless, natural pearls are incredibly rare, which has partially led to their value. In recent years, however, modern technology has allowed us to make cultured pearls.

Natural pearls are formed inside of oysters, under a set of accidental conditions when a microscopic intruder or parasite enters the inside of the oyster shell. The oyster, being irritated by the intruder, forms a pearl sac of external mantle tissue cells and secretes natural chemicals to cover the irritant. This chemical secretion process is repeated many times, thus producing a pearl. Because this entire chemical process is entirely natural, it is rather rare for an oyster to create a perfectly round pearl. In fact, most of the natural pearls created come in many shapes other than round.

Cultured pearls can be distinguished from natural pearls by X-ray examination. Nucleated cultured pearls are often ‘pre-formed’ as they tend to follow the shape of the implanted shell bead nucleus. Once the pre-formed beads are inserted into the oyster, it secretes a few layers of nacre around the outside surface of the implant before it is removed after six months or more. When a cultured pearl with bead is X-rayed, it reveals a different structure to that of a natural pearl. A cultured pearl shows a solid center with no concentric growth rings, whereas a natural pearl shows a series of concentric growth rings.

By clicking "Accept All", you agree to the storing of cookies on your device to enhance site navigation, analyze site usage, and assist in our marketing efforts. You may change your settings at any time or accept the default settings. Cookie Policy

On our website, we use services (including from third-party providers) that help us to improve our online presence. The following categories of cookies are used by us and can be managed in the cookie settings. We need your consent before being able to use these services. Alternatively, you may click to refuse to consent, of access more detailed information and change your preferences before consenting. Your preferences will apply to this website only. You can change your preferences at any time by returning to this site or visit our privacy policy.

By authorizing third-party services, you allow the placement and the reading of cookies and the use of tracking technologies required to keep our website reliable and secure.

These cookies are required to run available services and to provide basic shopping functions. These cookies are exempt from consent according to the exceptions provided by the Article 82 of Data Protection Act

These cookies allow us to measure visitors traffic. They also help us understand which products and actions are more popular than others